Official visit of Chief Justice to the Kingdom of Spain

By the invitation of Chief justice of Kingdom of Spain Mr. Carlos D. Serrano, Chief Justice of the Supreme Court of Mongolia Mr. Ts. Zorig paid official visit to Madrid, Kingdom of Spain, on June 25-29, 2015.

First day of the visit Chief justice of Kingdom of Spain Mr. Carlos D. Serrano welcomes Chief Justice of the Supreme Court of Mongolia Mr. Ts. Zorig and his delegations.

During the meeting they exchanged views on future ways of bilateral cooperation and strengthen mutual friendly relationship both counties as well as ways to exchange juridical information and cooperation. In addition they have reached agreement that training for Mongolian judges at Judiciary of Kingdom Spain. 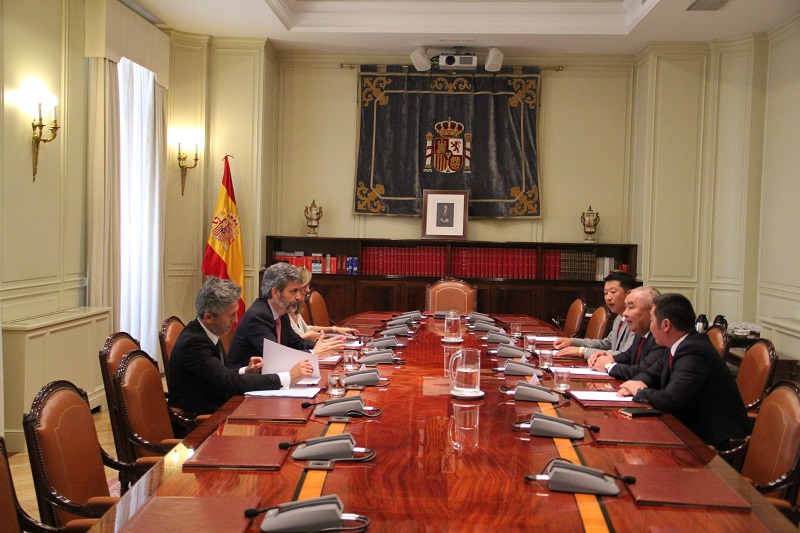 At the meeting, Chief Justice Mr. Zorig highlighted that Mongolia has intensified its programs seeking to reform the legal system as a whole and, in particular, Mongolian judiciary in all its aspects. Thus, a total reformulation  is for of our substantive and procedural laws is at work and is foreseen to be completed in a comparatively short period of time. The main goal of this reform is said to bring our domestic laws closer to international legal standards and introduce the best practices known to developed countries to daily operations of our law enforcement agencies and all levels of our courts. In this connection, the Supreme Court of Mongolia has also taken initiative to train our judges at prestigious international institutions such as Spanish Judicial School.

In frame of visit program Delegation led by Ts.Zorig visited the Supreme Court of Spain as well as Provincial court at Madrid.